Now that you know all about the stylish and fashionable Chevron Print – thought I’d introduce another similar print which is definitely making its way up in fashion. It’s called the Herringbone Pattern and yes it’s Herring as in fish! The reason why it got that name is simply because the pattern resembles the skeleton of a fish, specifically the one of a Herring.  The Herringbone print can actually be easily mistaken for the Chevron print since they both give off the zig-zag look or effect. However, once you take a closer look you will clearly see that they are made differently.

The herringbone print was developed during the Roman Empire for construction techniques (landscaping, etc.) and was actually called Opus spicatum, or “spiked work.” However, after the fall of the Roman Empire, many of the fundamental construction techniques got lost and forgotten. The Herringbone print came back around during the Renaissance in Europe but this time it was big in Architecture. Today, Herringbone can be found in areas of design such as pavement, floors, tiles, textiles and of course clothing.

The pattern can often be found on close inspection of tailored wool garments such as jackets and coats. It is usually made with a thick fabric such as Twill and Tweed. However, lots of clothing, head covers, accessories and more have the Herringbone Pattern simply printed on it. For example, this Dacee Designs head wrap has the herringbone pattern simply printed on it instead of the fabric actually sewn together to form the print and it makes the perfect hair accessory to hold back your hair in these hot summer months!

So as you can tell, the Herringbone print is a really complex pattern or design which makes it all that much cooler to have! Look out for our Blog next week on how to braid your hair like a Herringbone- FISH TAIL BRAID!! 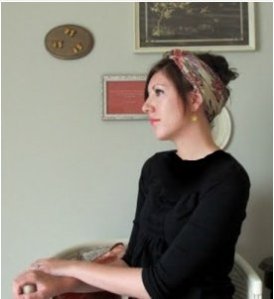 This past weekend was really hot. Like not just the hottest days of the year, but the hottest days in many years. I didn’t want to leave my air conditioned house. But I wasn’t going to let the heat intimidate me; I had errands to run, shopping to do. But I knew that it was going to be tough to look fresh. So when I went out, rather than show my humidity-suffering hair to the world, I wore a head scarf.

It was nice because I felt like I wasn’t trying to impress anyone with my do, and I looked good all the same. Head scarfs do a great job of soaking sweat and keeping you cool because they block the sun from hitting you. That’s why people wear headwraps in the desert. I didn’t even wear sunscreen. And I made a fashion statement about dealing with the heat.

It’s interesting that headwraps are so multi-functional. You can just as easily wear them to protect your head from the cold as you can the heat. And they’re great for dealing with your hair when you don’t want to deal with your hair. So the next time it’s a hundred degrees plus, think about a head scarf and your problems will be solved.